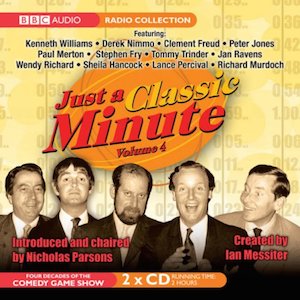 1969- (Kenneth Williams, Clement Freud, Derek Nimmo and Sheila Hancock) Ms Hancock holds her own very nicely and her contribution to the subject of 'Slimming' is brilliant. I wouldn't have described it as a 'classic' though, not by any stretch of the imagination. I mean - 'Straining spaghetti through a tennis racket'? What was Ian Messiter drinking when he came up with that one?

1978 - (Kenneth Williams, Clement Freud, Peter Jones and Tommy Trinder) This is a real Kenneth Williams tour de force, although Tommy Trinder gets a huge number of laughs without taking a particularly active role in the actual game itself. Between the two of them they do make this one an absolute classic. The subject of 'My pleasure' is the real highlight, although Kenneth Williams' contribution to the topic of 'Aimee Semple McPherson' is fabulous. I had never, ever heard of her before this show. And I can't say I've heard of her since. But at least I have these sixty seconds' worth of trivia about her to tide me over.

1989 - (Richard Murdoch, Wendy Richard, Lance Percival and Clement Freud) Wendy Richard takes control of this one and proves to be highly entertaining. Richard Murdoch provides a great many laughs, although I'm not quite sure that he meant all of them. Lance and Clement were pretty much surplus to requirements for a lot of this edition and may as well have been in the pub. Perhaps they were?

1994 - (Peter Jones, Paul Merton, Jan Ravens and Stephen Fry) This is a terrific episode, thanks to the best efforts of Paul Merton and Stephen Fry. The subject of 'Achilles' heel' is hysterically funny. Jan Ravens struggles to get much of a word in but, very much like Peter Jones, when she does speak it is invariably to say something funny. I wonder how many editions of 'Just A Minute' Stephen Fry has actually appeared in? He is a natural at the game.