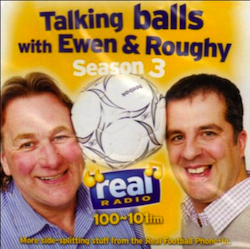 CD containing a full 70 minutes of the funniest moments from the Sony Award nominated "Real Football Phone-in". All these clips happened live on air. And for an extra time slice of action, Ewen and Roughy provide brand new and hilarious commentary linking the calls. Scottish football is the national game and the national passion: there's no end to the amount of fierce debate, trainspotter trivia and amusing banter that it provokes in homes, work places and pubs across the country.An unhealthy proportion of it seems to end up on Scotland's top commercial radio station, Real Radio, on "Ewen and Roughy's Football Phone-in". Broadcasting for two hours each day from Monday to Friday, Ewen and Roughy have become the premier presenters in the football phone-in league, provoking debate and laughter across huge swathes of the country. The success of the show has been extraordinary. When last season wound down, Ewen and Roughy's football quiz helped to fill all those barren hours when there was no football to talk about, and proved enormously popular.