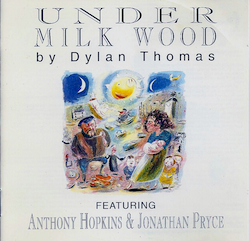 In 1988, George Martin produced an album version, featuring more of the dialogue being sung, with music by Martin and Elton John, among others; Anthony Hopkins played the part of 'First Voice'. This was subsequently done as a one-off stage performance (as An Evening with Dylan Thomas), for The Prince's Trust and in the presence of HRH Prince Charles, to commemorate the opening in December 1992 of the new AIR Studios at Lyndhurst Hall. It was again produced by Martin and directed by Hopkins, who once again played 'First Voice'. Other roles were played by Harry Secombe, Freddie Jones, Catherine Zeta-Jones, Siân Phillips, Jonathan Pryce, Alan Bennett and, specially for the occasion, singer Tom Jones. The performance was recorded for television (directed by Declan Lowney) but has never been shown.