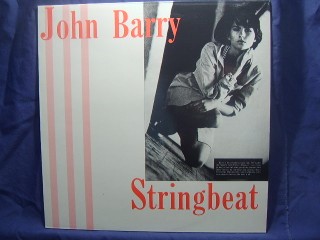 Review (allmusic)
John Barry's first fully realized album had a title that was a "play" on his previously issued soundtrack, Drumbeat. Utilizing the members of the John Barry Seven (especially guitarist Vic Flick) and a small string orchestra, plus Ted Taylor's Clavioline electric keyboard, Barry delivered an engaging piece of audiophile instrumental music, and one which manages cross swords with rock & roll and soundtrack music, as well as the Muzak that lay in P.A. systems' future. Mixing electric instruments and a string orchestra, coupled with lively arrangements, Stringbeat is both a playful piece of "bachelor pad" music and an elegant piece of pop/rock. The opening track, "It Doesn't Matter Anymore," emulates the Dick Jacobs arrangement that was used on the Buddy Holly single of that song, right down to the smallest nuance  it also is a quiet acknowledgement of the degree to which Barry and his septet used Holly's sound as the model for their own sound on their early singles. "A Handful of Songs" shows Flick playing in a relatively restrained mode, and "Like Waltz," a Barry original, is a surprisingly bluesy string-laden instrumental. Other tracks include the bouncy Jerry Lordan instrumental "Starfire," which crosses into Joe Meek territory with its use of the Clavioline and its interaction with Flick's guitar; and "Rodeo," an inventive guitar instrumental whose Western theme material is carried in a counter-melody that's derived from "Bury Me Not on the Lone Prairie." It's all quite delightful, if not exactly the hardest rocking record of its era, and intersects with enough currents in popular music and rock & roll to be worth hearing 50 years later.